This year I again participated in DigitalOcean’s Hacktoberfest event! This was my 2nd Hacktoberfest, having participated last year for the first time. The mission of Hacktoberfest is to help the open source community on GitHub grow and flourish by getting people involved in open source. Participants this year were challenged to open 5 pull requests in public GitHub repos during the month of October, with the promise of a Hacktoberfest 2018 T-shirt should they accomplish this.

I didn’t realize until just now, but the number of pull requests needed to get a T-shirt increased since last year, from 4 to 5. Hm.

My contributions this year were much more focused than last year. I knew I had to get my pull requests made early, since I had a busy schedule in my personal life the latter half of the month.

Luckily, I found some issues to tackle in a project that I use practically every day, the Chrome extension streamkeys. From there, I explored a little bit and admittedly copped out a bit by finding a “GitHub List” project to contribute to. You know the ones, “awesome-x” or “big-list-of-blah”. I am by no means knocking any projects like that, I have starred several projects like these on GitHub, and they are great crowd-sourced fountains of information! But it does feel a little disingenuous to have a pull request for one of them count toward Hacktoberfest, in my opinion. However I made up for it by making 6 pull requests during the month, so I think it evens out in the end.

As I mentioned earlier, I use streamkeys all the time. It’s just such I useful extension for me, I love it! I hope it never goes away, I know there was a recent rough patch when it was being hidden on the Chrome Extension Store and Google was being a bit opaque about why. This year I made PR #459 and PR #460! The latter is definitely an exciting one for me, I love the notification support streamkeys has (after all I did play a role in adding it), and I think more metadata in the notification popup is a very nice feature to have.

This is the “GitHub List” type project I contributed to. Again, I don’t mean that in a disparaging way! I starred this project when I found it, as I don’t doubt it will be an invaluable resource in the future when I feel like learning through guided building! Reading through the list, the Text Editor section stood out as interesting to me, and after a little research into tutorials on making a text editor, I found an interesting article to contribute and created PR #273.

Onto the one I’m most excited about - Vita3K. An experimental Playstation Vita emulator. Emulation is a hugely interesting topic to me. There are some sticky arguments to be fought over some aspects of the emulation scene, but I’m not here to get into those. The Playstation Vita is home to some truly great exclusives, of which I’ve regrettably experience only a few so far (Persona 4 Golden and Persona 4 Dancing All Night). This emulator is very, very early in its life, however. Though it’s probably the most well known Vita emulation project (maybe the only one?), it’s relatively obscure thus far, and starving for developers. Seriously, if any developer has an interest in writing some code for Vita3K, feel free to visit the Vita3K Discord server! Though I’m a huge newbie to emulation in general, I hope to continue contributing to Vita3K in the future, but I recognize that I have a ton to learn. My contributions for Hacktoberfest were #339, and #344. New as I am to the emulator, my only sense of “what needs doing” comes from open Issues, both of which my pull requests take small steps in resolving.

Helping a project on GitHub that you use yourself or just find interesting is its own reward, there’s nothing quite like that feeling of donating your time to a project you’re passionate about. That’s all the reward anyone needs. 😊 …Of course, the physical rewards provided by DigitalOcean to those who completed their 2018 Hacktoberfest challenge are greatly appreciated as well!

I received my Hacktoberfest 2018 package in the mail recently, and I was pleasantly surprised to see that in addition to the T-shirt and stickers, there was also a cardboard-ey “Hacktoberfest 2018” coaster in the package. That was a nice unexpected bonus!

Though I can’t remember for sure, I think 2017’s Hacktoberfest package was just a simple mailing envelope. The envelope this year was colorized and sported a Hacktoberfest 2018 logo as well. 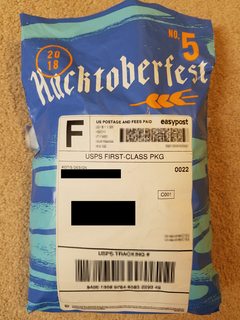 Each of the stickers included is different from the ones from last year, which is nice. 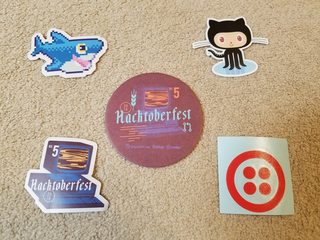 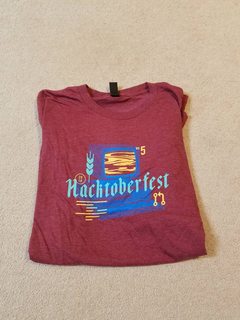